Suggested Use: 3 sprays under tongue just before sleep and upon waking. Hold for 2 minutes, then swallow. “The overall deterioration of the body that comes with growing old is not inevitable. We now realize that some aspects of it can be prevented or reversed.”
Dr. Daniel Rudman (Researcher of Human Growth Hormone)

In essence, we are turning back the biological clock

The Ultimate Supplement is not a precursor, a secretagogue, or a GH releaser. It is a natural amino acid complex that is identical1 to the growth hormone (Somatropin) your body produces in a delivery system that is safe and efficiently absorbed sublingually for maximum utilization of the body.

The pituitary and the gut releases hGH in parts per billion and even parts per trillion. Further, the Ultimate Supplement contains 1/75 to 1/1000 the concentration found in the hGH injections, yet its low oral dosage (4800 nanograms daily) mimics the body’s own secretions of hGH and works with the body in the natural GH release cycle.

200 healthy patients were screened and tested (112 females and 88 males). IGF-1 testing was the standard accepted protocol for evaluating the level of Growth Hormone in the blood.

Patients were pre-examined to determine a baseline IGF-1 (the important protein that builds cells) in adults: 114.26 ng/ml in females (average age 51) and 135.22 ng/ml in males (average age 48). No change in diet was advised, however it was noted that all patients ate an average of 3 meals per day with approximately 3000 calories.

Cholesterol levels were diminished in 94 patients by an average of 14.8%, and triglyceride levels were also reduced by 31%. Improvements were noted in mental stability, muscle accretion, weight reduction, energy level, libido, epidermis rejuvenation, and reacquired hair color and density. In all 200 patients no adverse side effects were reported or observed.

The study showed that the patients consistently evidenced marked progressiveness towards balance and that the Ultimate Supplement amino acid complex is an effective method for encouraging and promoting the rejuvenation of cellular tissues.

What are Hormones?
Hormones are the chemical messengers of the body. A highly intricate hormonal system carries messages to the body telling it when to digest, regulate temperature or produce the fight or flight response. Cutting edge research has shown, for example that the Pituitary gland alone produces six hormones including Bio-identical growth hormone. The hormone system is rather like a finely tuned symphony orchestra that depends on the balance and harmony of every instrument in order to perform at its best. Unless our hormones are in perfect balance and there are adequate secretions of every hormone, we aren’t healthy.
What is the Human Growth Hormone?
The human growth hormone (hGH) Somatropin is an amino acid (protein) chain secreted by the pituitary gland and gut. Somatropin is directly responsible for stimulating tissue repair, cell replacement, and brain function; it affects every cell in the body, constantly rejuvenating the cells of the skin and bones, the heart, liver, lungs and kidneys, and helping keep organ and tissue functions occurring. hGH is a hormone that lowers the risk factors for heart attacks and stroke, improves oxygen uptake and prevents osteoporosis. Test studies have shown that after six months of hGH supplementation, an average of 18% body fat changed to 8% youthful, lean muscle without diet or exercise. In view of that, hGH may be the most effective anti-obesity agent ever discovered, revving up the metabolism to youthful levels and reducing fat while increasing muscle mass Tests indicated that after supplementing hGH for six months, there was a trend of hair re-growth, melanin restoration and sharper vision. Tests also indicated a smoothing out facial wrinkles by restoring the elasticity, thickness and contours of skin. Tests also indicated older people reporting reduced insomnia and a more relaxed attitude with a higher threshold in coping with daily stress. Studies of increased growth hormone in the body also indicated:
How We Age
During anabolism, the growing period to adulthood (up to 33 years of age), approximately 80% of a young adult’s body consists of lean body mass (muscles organs and bone). The remaining 20% is made up of fatty adipose tissue. After the period of anabolism, the body enters catabolism – the winding down of metabolic functions. The first indication of catabolism is that the muscles begin to atrophy and we get tired more quickly; the aches and pains begin.
Why are old people shorter? During anabolism, your bones are continuously being remodeled. Calcium building blocks form new bone cells while the body reabsorbs old ones. During catabolism re-absorption exceeds bone-building and bone mass begins to decrease. Those who have aged tremendously exhibit as little as 2% of their youthful hGH output. When young, 10% of the tissue is bone and 90% is soft tissue, but after age 50 the ratio changes. By age 75, the body, on average, has 20% less bone than when young. Nearly 100,000 people die each year from the complications of fragile bones. Although some therapies show some promise in preventing bone loss, it is a general trend that therapies cannot do anything to build bone. Cell proliferation declines up to 10-fold as the condition of aging progresses. One of the reasons we get old is that we do not have enough hGH to produce enough new cells. Another primary factor in aging is the slowing down of glandular functions resulting in hypo-hormonal output – not enough hormones to fully supply efficient metabolic processes. One of the crucial factors is PDS (Pituitary Deficiency Syndrome) in which the pituitary output of Human Growth Hormone diminishes dramatically as we get older.
By the age of 40 most of the population has deficient levels of human growth hormone 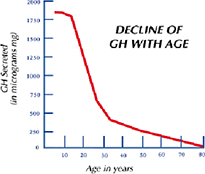 By the age of 60, two-thirds of everyone have substantially deficient hGH levels. The average loss of hGH is 10 to 15% per decade. It is not uncommon that at the age of 60 there is an hGH decline of over 75% or more from the levels normally seen in 25 year olds. Those individuals in their seventies, who have aged tremendously indicate that their pituitary gland is barely producing any hGH.

How does hGH work?
The growth hormone Somatropin is an amino acid (protein) chain that is produced by the pituitary gland. It is essential for the proper protein synthesis of all lean body mass i.e. muscle, bone, organs, skin and vertebrae. hGH is responsible for the maintenance and protection of these tissues. hGH accomplishes this by utilizing proteins and amino acids from the body’s adipose tissue. The body uses these fats to supply most of the energy for cellular functions. Thus hGH acts as a protein sparer; and since the adipose tissue is an easy store of fat for energy, hGH also acts as a carbohydrate sparer, thereby decreasing the necessity for using proteins for glycogen production or gluconeogenesis. It is widely accepted that many health conditions are linked to high concentrations of fat in the body. The primary issue of the hGH in slowing down the body’s aging is that in normal cell division, hGH helps form young new cells. As we age with less and less hGH being produced, less cells divide (regenerate) into the youthful cells that help keep us physically young. The actions of hGH [supplementation] in the body:
Research
In the past half-century, universities and medical centers in the United States and Europe have conducted extensive research into the effects of supplementing recombinant human growth hormone (rhGH, bio-identical to somatratroprin) on people with growth hormone deficiencies. Their tests show that by supplementing hGH, the body’s biochemistry becomes more balanced and efficient. hGH reaches far beyond the scope of any hormone like progesterone or testosterone and other hormones that decline in production with age in that hGH helps the body’s metabolism to normalize and start to produce these hormones at youthful levels and reversing catabolism and promoting anabolism of general cell rejuvenation. Dr. Daniel Rudman, with a team of researchers, documented the effects of his studies at the Medical College in Wisconsin and at the Veterans Affairs Medical Center in Milwaukee. The results were reported in the New England Journal of Medicine as a major breakthrough in the eternal quest for health and beauty.

Disclaimer: BiomagScience makes no medical claims – Statements contained herein have not been evaluated by the Food and Drug Administration. These products are not intended to diagnose, treat and cure or prevent disease. Always consult with your professional health care provider before changing any medication. The information is for educational use only. Do not attempt to self-diagnose or treat any condition. Please consult your healthcare practitioner if you believe you may have any of the signs or symptoms discussed above before using any of the nutrients discussed. You should also consult with a healthcare professional before starting any diet, exercise or supplementation program, before taking any medication, or if you have or suspect you might have a health problem. Always read and follow all label directions.

There are no reviews yet.